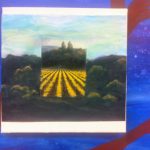 Ruby Gibeault has spent the past 12 years living at Porta Place apartments in Edmonton’s Beverly Heights neighbourhood. She made the choice to move out of her house near Commonwealth Stadium and was immediately drawn to the community around her new apartment. If you ask her what she thinks of the East end area she calls home, she’ll smile wide as she tells you about the community she’s grown into.

“It’s like a little village,” says Gibeault. “It feels very senior friendly and you can walk pretty well anywhere. There’s a park just a block away that I spend a lot of time at when I’m out walking. I think most of the seniors who live in this area feel that connection to the community.”

That community connection grew when the Abbotsfield Youth Project approached the Beverly Lodge with GEF Seniors Housing and the connected Porta Place apartments to be part of Love Grows Here. The initiative sees elementary school aged kids from the North East Edmonton communities work with seniors on an art project that expresses what they think about their neighbourhood. Rebecca Prentice, another tenant with Porta Place apartments who took part in Love Grows Here, explains that having the opportunity to interact with the kids brought a whole different energy to her day.

“There were barely any quiet moments while we were all working together,” says Prentice. “We were constantly talking and throwing around ideas and trying different things. In the end, all of the ideas came together.”

The final project that came together was a tree with a different kind of artwork on each branch. The kids each painted something that represented what they thought of their neighbourhood. Some of the seniors were nervous about trying their artistic skills, so they used a little bit of creative ingenuity to express themselves.

“I found some old magazines and clipped out the pictures and I painted around that,” says Prentice. “We all did something different to express what the Beverly neighbourhood means to us.”

Jean Charchuk, who lives in Beverly Lodge, wrote a poem that reflects her regular walks through the neighbourhood. She explains that she had cousins who lived in the area while she was growing up, so she always had a connection to the neighbourhood. “I’ll walk through Beverly, into Rundle Park, and down to the river,” says Charchuk. “I see a lot of things when I take these walks.”

Audrey Weir, who also lives at Porta Place apartments, painted trees and a long roadway. “It’s a memory from walking along Ada Boulevard,” says Weir, who moved into Edmonton’s North East corner in the mid-1950s. “I remembered how the trees hung over the road.”

One of the most surprising things the ladies learned was how interesting they found the kids. The mix of generations helped everyone involved learn to appreciate each other more, learning that everyone has something to give. Prentice fondly remembers the ice-breaker game they played when they all first met. They each had to put a fact about themselves into a hat, then the facilitator would draw each fact one by one and the room has to guess who the fact belonged to.

After the five sessions, the final art piece was unveiled at the Abbotsfield Youth Project Society office on December 1, 2016. Since then, the piece has moved around to some of the schools in the area, to the Suncor offices (who sponsored the project), and is set to arrive back to Beverly Lodge later in 2017.

For Weir, as much as she loved creating for the final piece, she found that watching the kids create to be most intriguing. She says that to see the kids put a glob of paint on their brushes and stare off into space as they created something was really fascinating.

“I have grandkids and I’ll sometimes just sit back and watch and listen,” says Weir. “That’s when you get to see them for the people they are. I did the same with the kids while they painted and that was fun.”

Charchuk explains that she gravitated towards one of the older boys taking part in the project. She says that she noticed he was quiet and seemed to be almost daydreaming, which reminded her of herself at that same age. As the two connected, she learned how artistically talented he was and it helped to inspire her.

“I watched him draw and I remember thinking that he can really translate what he has in his head onto the canvas,” Charchuk says. “After the project, he and some of the other kids wrote me a letter to say thank you and I cried while I read it. It was such a nice letter and it meant so much to me.”