The Building for Life Fund 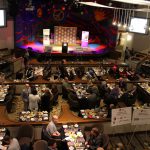 “We work with a lot of different contractors and consultants and other companies to help our Foundation,” says GEF Seniors Housing CEO Raymond Swonek. “The Building for Life Breakfast Fundraiser helps remind our business networks and community connections that we are a registered charity and donations that we receive go towards new seniors housing building projects in Edmonton.”

“We often talk about the statistics showing that there will be more than one million seniors living in Alberta in less than 15 years and it can be hard to picture what that number really means,” explains Swonek. “The current population of Edmonton is around one million people. So imagine the entire population of Edmonton all being seniors. That’s the population boom we’re looking at. Using our Building for Life Fund, we plan to build more housing options for seniors to meet that need.”

In addition to the population boom of seniors in Alberta, the proportion of seniors needing affordable housing is increasing at a rapid pace. The cost of living increases faster than pensions, leaving many seniors unable to afford even the most basic of apartments. Swonek points out that the average senior living on a Government pension alone brings home around $1,800 a month and, to remain above the poverty line, that senior should only be putting 30 per cent of their income towards housing.

“That would mean seniors living on Government pension alone would have to pay around $540 a month in rent to stay above the poverty line,” says Swonek. “In Edmonton’s housing market, that’s simply not possible. We want to make sure that low to moderate income seniors can enjoy their golden years without worrying about high housing costs that are only increasing.”

“We saw so much success in the past with buildings like Rosslyn Terrace and Ottewell Terrace that I’m excited to see what we can achieve with future building projects,” says Swonek. “I’ve always believed that we’re only as strong as those who support us. We’ve been so lucky to see support from so many amazing Edmontonians and I hope that we can keep this level of support because there are a lot of seniors depending on it for an affordable place to call home.”