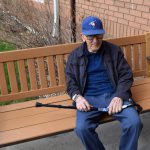 On October 8, 2017, Ed Archer will turn 97 years old. When he tells people how old he is, they don’t believe him. This might be because at almost 97 years old, Archer still hasn’t really retired. After he moved into Rosslyn Terrace in 2014, he started asking around to some of the staff at the building if there was anything he could do to help.

“I’m not one to sit around for too long, I get bored,” says Archer. “If something needs to get done, if something’s broken, I just want to fix it.”

Rosslyn Place’s Site Maintenance Jim Cadzow heard that one of the tenants in the connected Rosslyn Terrace was looking for work to do and decided to see what he could help out with. Cadzow wasn’t expecting much at first and he was quickly and pleasantly surprised.

“I asked him if he was good at carpentry and he said he was, so I gave him a bench to work on, more or less to test out what he could do,” Cadzow says. “Next thing I know, he has the whole bench taken apart. He’s sanding and staining the wood and asking for new two-by-fours so he can replace some of the broken ones on the benches.”

Archer grew up on a farm in Mayerthorpe, Alberta, and explains that he took to working with his hands early on, fixing whatever he could whenever it needed to be worked on. That passion for hard work followed him throughout his retirement and, as Cadzow explains, he hasn’t lost much steam over the years.

“In all, Ed [Archer]’s taken apart and repaired 18 benches so far,” Cadzow says. “And this is good work. He hand cuts all the wood and replaces broken parts piece by piece. Looking at the benches, you would think they were brand new and before Ed got a hold of them, they were ready for the dumpster.”

Benches were only the start of Archer’s work around the Rosslyn buildings. Soon, he was pressure washing and repainting the gazebo in the courtyard, trimming trees, repairing the outdoor handrails, helping fix up sidewalks, and even repairing some of the mechanical equipment Cadzow was using.

“I had this snowblower and this rototiller, and neither worked really all that well,” says Cadzow. “So I asked Ed [Archer] if he knew anything about engines. He took apart the snowblower and rototiller, fixed them up, put them back together, and I haven’t had a problem since. They’ve never worked better.”

Cadzow quickly realized that Archer needed a designated spot to work on all of the projects he had been taking on. In the far corner of Rosslyn Terrace’s underground parking garage, a wooden sign hangs saying, “Eddie’s Workshop.” Cadzow made the sign for Archer and created a space for all the incredible work he’s been doing.

Archer typically spends most of his days down in his workshop. He’ll head down before 8:00 a.m., bring a lunch with him, and finish up around 4:00 p.m., just like if he was still working a regular day job. Cadzow often reminds Archer that he doesn’t have to work so much, but Archer’s drive keeps him going day after day.

“I still have one bench in my workshop that I haven’t been able to finish because of a foot injury,” Archer says. “I feel like that bench is laughing at me. I need to finish it. The doctor told me I can’t work until my foot heals, and I’ll be plenty happy when it does and I get back to work.”