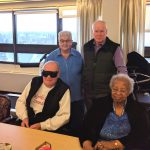 Bob Baldwin completed the Glenrose Hospital’s Short Term Assessment Rehabilitation and Treatment program close to seven years ago. The twenty-week program saw Baldwin attending discussion groups and presentations on memory, relaxation, visualization, depression, panic attacks, and other cognitive and mental health issues. Throughout the program, he made close ties with other participants with whom he connected because they were all seniors and all living with different mental health conditions. As the program was coming to a close, he realized that the work he had begun with the START program should not just end.

“The way the program ends is shuttering and kind of cold turkey,” says Baldwin. He explains that for some, the program ending sees a significant rise in the same mental health conditions they experienced before the program. “The contrast between how good you felt at the START program and then going back to living without it was really bad for some people.”

Realizing that easing off of a mental health support program would be better than simply ending, Baldwin and other friends he had made through the START program began exploring various seniors associations and recreation centres to see what existed to continue the mental health support work. Quickly he realized none existed. “We circled around the city and ended up right back at the Glenrose Hospital,” Baldwin says with a laugh. “That’s when it became clear that we needed to create this support group for ourselves.”

Leaning on his experience in leadership and organizing from his career as a teacher, Baldwin got help from the Glenrose to form START Plus. The staff at the hospital recognized the importance of building on the foundation that had been put in place by the START program and of having it organized and administered by the very people seeking the peer support. At its largest, START Plus had between 12 to 15 seniors regularly attending the Wednesday morning meetings. Finding a permanent home for the meetings proved to be a whole new challenge for the group.

“We would meet at the Glenrose, and we moved all around the building trying to find somewhere private and quiet to hold the meetings,” recalls Baldwin. “But we realized that we would have to find somewhere different to hold our meetings if this group were to be successful.”

One of the group’s members, Marlene Jones, immediately thought of her apartment building as a good venue for the regular meetings. She has lived at Strathcona Place for the past seven years, and remembered there was a large boardroom up on the ninth floor perfect for holding private meetings. The group has been happy in this space ever since, continuing the regular meetings and even having special guests attend, such as the Alberta Seniors Advocate, Dr. Sheree Kwong See.

With the group flourishing in its meetings, the members have grown incredibly close, being able to contact each other outside of the meetings and even creating memorial plans for each other as they face the inevitability of members passing on. The group decided that (if the individual member chooses to do so) as members pass on, they would have stars placed up in the Telus World of Science in remembrance.

“There’s a connectedness to this group; even if the members aren’t around, you know you’re connected to them,” says Jones. “The group has helped break isolation, encouraged us to reconnect, and made us interested in being a part of our communities.”

The mission of START Plus can be summarized as socializing, supporting, and providing a safe place in which to talk. What’s shared amongst the group stays with the group. The trust among the members is paramount to the group’s success, and the regularity of the meetings assures them that when they need it, there will be an ear — actually many ears — to listen.

“Even if there are only two people, we’ll have a meeting,” says Jones. “There would be a lot of disappointment if a meeting were cancelled. It gives us a sense of purpose and adds to our quality of life.”

Baldwin echoes Jones’ sentiment about START Plus giving the members of the group a sense of purpose. As the group selectively looks for new members (many of whom are from the START program at the Glenrose Hospital as well) and stands ready to help establish other groups with a similar mission, Baldwin reflects on why he continues to work so diligently on this group.

“I often get asked why I put so much time into START Plus,” says Baldwin. “It’s really not an onerous job and it gives me a sense of purpose. It’s something to look forward to. There are plenty of Wednesdays when I think ‘I’d rather stay in bed.’ I’m happy, though, every time I make the effort to come out to talk, give some support, and meet with ‘my second family.’”