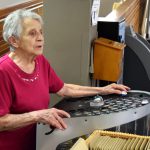 Kay Robertson stands off to the side of the common sitting area at Beverly Place lodge. Three tables of men and women leaning over their bingo boards are laid out in front of her. They listen carefully as she calls out the numbers and letters, never stuttering or muttering as she draws each new ball.

Calling bingo is Roberson’s favourite volunteer activity and makes up a good chunk of her very active lifestyle. At age 93, she hasn’t slowed down her volunteer efforts and was recognized by local Edmonton MP Kerry Diotte with a 2017 Volunteer Award for her hard work and dedication over many years of volunteering.

Robertson started volunteering around 44 years ago when she and her husband first moved to the Evergreen area. She volunteered with the Evergreen Community Association right up to when she moved to Porta Place Apartments in 2007. In addition to her work with the Evergreen Community Association, she volunteered with the Lauderdale community, where her son still lives. It was her work specifically with the Lauderdale community that earned her the accolade from MP Kerry Diotte. She explains that being given the award was unexpected.

“My son told me we were going for a dinner with the Lauderdale community,” Robertson recalls. “All of the sudden, they’re calling my name and giving me an award. Once the shock wore off, I got to be very happy about it.”

This wasn’t Robertson’s first recognition for her volunteerism. In 2010, the Edmonton City Council awarded Robertson with a plaque in recognition of her contributions to the Evergreen Community Association, signed by at the time Edmonton City Mayor Stephen Mandel. As great as the awards and recognitions are, what drives Robertson to keep volunteering is knowing how much other people appreciate the time and energy she gives.

“With the bingo games, for example, that’s all a lot of the players have to look forward to,” Robertson explains. “I grew up in a big family, there were ten of us girls and three boys, so I like people and I like doing things for people. I don’t expect anything back for it.”

The deep connections Robertson’s made with many of the other residents and tenants between the Beverly Place lodge and Porta Place Apartments has helped her understand many of her neighbours and community members better and has helped keep her motivated to continue volunteering. She points out that many of the stories she hears about hardships and turmoil makes her appreciate the good life that she’s had and to give back whatever she’s able to.

Though she isn’t able to volunteer with the Evergreen community or the Lauderdale community anymore (last year, she finally decided to stop driving and sold her car), she hasn’t necessarily reduced the amount she volunteers. She’s just found more around her home to do for her neighbours. Even on top of all the volunteer work she does, Robertson still finds as much time as she can to get outside.

“I’m calling bingo again on Saturday and afterward my son is picking me up and I’ll be golfing with him, my granddaughter and her husband,” Robertson lists. “We’ll get a cart and play 18 holes around the Rundle Park Golf Course. I even still have my golf clubs.”

Robertson’s energetic and active lifestyle shows what aging with a good quality of life can do for a person. When people live somewhere that allows for those opportunities to arise, they’ll give back to the community that they’re a part of. For someone like Robertson, giving back is a natural drive that helps keep her going every day.

“I have to be doing something,” Robertson says with a laugh. “I can’t sit around and stare at four walls all day. As long as I’m able, I’ll keep volunteering.”

Gordon Coolidge points to the peony bush at the back of Barvinok Apartments in Edmonton’s North East. He planted the bushes in the spring but knows, as the summer days are becoming fewer and fewer in number for the year, he has some work to do before the fall.

“I have to take the leaves and split them open,” he explains. “They need to breathe during the winter kill. Otherwise, they’ll suffocate and won’t regrow next spring.”

Coolidge, always something of a green thumb, kept up his garden while he lived and worked out of Westlock up until 2006. He moved into Barvinok Place after he suffered a stroke during an 11 and a half hour triple by-pass surgery. He explains he was bounced between hospitals for more than six months to see different specialists before finally deciding moving into a seniors apartment was his best option.

“I moved in before GEF Seniors Housing started managing the building, and I right away noticed that the garden hadn’t been kept up,” Coolidge recalls. “I started by digging out the dry clay balls from over the years and I put in all the soil for a healthy garden.”

What started off as activity to keep Coolidge busy evolved into a passion that he credits for helping keep him healthy and happy. He explains that gardening is no easy task and is a full body workout that keeps the 79 year old active.

The garden at Barvinok Apartments has helped to brighten up and add colour to the Beverly Heights neighbourhood and plenty of people in the community have taken notice. In the summer of 2017, the garden was nominated for a Front Yards in Bloom Award, which is a recognition program for outdoor space that adds to a greener and more sustainable urban environment.

The Front Yards in Bloom program is run by the City of Edmonton, the Edmonton Horticultural Society, and the Canadian Union of Postal Workers. It sees postal workers and other volunteers walk through neighbourhoods to find spaces that have aesthetically pleasing gardens or growing edible fruits and vegetables. The best spaces receive a nomination card to place in their garden. The official awards will be given out on August 24, 2017, at the former Royal Alberta Museum.

“I always had neighbours coming by to take pictures and tell me that they love the garden,” Coolidge explains. “But I never expected a recognition like a Front Yards in Bloom nomination.”

As he approaches 80 years old, Coolidge has no plans to ever slow down on his gardening. He walks through his garden, pointing out the weeds he pulled before adding the pots of coleus plants alternating in purple and green, and revelling in how many bees are working hard to pollinate with the help of the flowers he planted.

“You need to have something to help you get up in the morning and get you through the day,” Coolidge says. “I don’t want to sit around and get old. You’re never old until you admit it. Until then, I’ll spend all day working in the garden.”