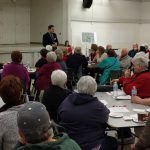 In April of 2016, GEF Seniors Housing hosted a community meeting with members of Elmwood and the surrounding neighbourhoods. The meeting was to discuss a new proposal for a seniors housing building on the vacant lot behind the Meadowlark Place lodge. GEF Seniors Housing’s Director of Facility Management Doug Kitlar explains that this initial meeting was expected to have around 30 people attend and share a few ideas for what the building should look like and how to integrate it into the neighbourhood. By the time discussions began, more than 100 community members were in attendance.

“We were still setting up tables and trying to find more coffee by the time [GEF Seniors Housing CEO] Raymond [Swonek] began the introduction for the discussion,” says Kitlar with a laugh. “We’re really blown away by how invested this community is in seeing some new affordable seniors housing be added to the area.”

Community consultations are always unpredictable and typically have a few naysayers who come in ready to oppose any new developments, Kitlar points out. The meeting in Elmwood saw nothing but positive feedback and constructive ideas on how to best integrate the building onto what’s typically a busy street corner at 87 Avenue and 159 Street on Edmonton’s west end. With interest from the community being so high for this proposed building, Kitlar explains that the pressure is on to come back to the next community meeting with a solid building plan that the people will want to stay invested in.

“The building we want to add to this community really needs to add a lot of value to this area,” says Kitlar. “This is an area that’s seeing some big spikes in its senior population and we need to deliver a building that’s going to serve the needs for this area.”

Though the process for a new building project can come off as slow, a lot has progressed for Elmwood Terrace over the past year. The City of Edmonton re-zoned the land to accommodate a five or six story building. A study into the need for the building is required by the Province of Alberta and part of this study will include architectural designs for the space. More than 20 different architectural firms have expressed interest in working on the design of the building with GEF Seniors Housing.

Once the architect for the study is selected, a budget for the building will be set and brought to the Province of Alberta for its support. After the budget is approved and the Province dedicates its funds to the project, the rest of the team will be selected, including the general contractor. Kitlar explains that the team is looking to implement an Integrated Project Delivery (IPD) approach to the project, much like how Sakaw Terrace is being built.

“In short, IPDs see all project partners, from the architects to the contractors, having some financial stake in the game,” says Kitlar. “As the project progresses, if any setbacks come about, the partners put their profits at risk. This then motivates the partners to work more collaboratively to find creative solutions for any setbacks without compromising the quality of the building.”

With such strong interest in a new affordable seniors housing building in Edmonton’s west end, Kitlar knows the demand will only go up as time moves forward. He explains that any new capital building project is a long process. It’s those long processes that ensure GEF Seniors Housing will only open the best quality buildings to the seniors looking for a new home.

“If we’re looking at a building like Sakaw Terrace, for example, plans for that project began back in 2012,” says Kitlar. “We just broke ground on it in late 2016 and the building won’t be finished until 2018. It might seem like an incredibly long time for something as pressing as a growing seniors population who need affordable housing options. What we’re creating is a building that will be home for a lot of people. We don’t want to rush any of this. We want it so that when people move in, they know they’re in a safe and secure place that’s built to the highest standards. Elmwood Terrace will be no different.”