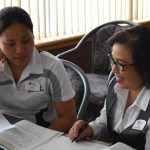 Miss Hofman officially retired from teaching grades one to 12 in Edmonton’s German Bilingual and regular program schools in the summer of 2013, but her teaching career didn’t. She’s taking her experience from teaching in schools and teaching English classes in Germany and applying it in helping some of GEF Seniors Housing’s staff improve their English. As Hofman explains, teaching these hard working individuals who spend their days making the lives of seniors living in Edmonton better is vastly different from much of the teaching she did in the past.

“These classes are almost entirely student driven,” says Hofman. “I always put together a class plan, but whatever the students need always comes first.”

The idea of teaching English to members of GEF Seniors Housing’s staff who are looking for the help started when Hofman initially met the staff during customer service courses. The courses had gone so well that she was offered an opportunity to also teach some health and safety courses. She agreed on the condition that she could also start teaching English classes, something she noted that many staff could benefit a great deal from.

“I grew up in Edmonton, but my first language is German,” explains Hofman. “I didn’t begin to speak English until grade one. I understand what it’s like to be in those situations where you don’t understand what’s going on and you can’t ask for what you need because of the language barrier. So I empathize a lot with the staff members who are working with people every day but don’t necessarily fully understand the language.”

Hofman explains that one of the biggest success factors she’s noticed with the classes, which she’s been teaching for three years across five GEF Seniors Housing sites, is that the class sizes are small. She notes that some classes have upwards of 10 people in them while others have only two officially registered students. The classes often focus on real world examples that the students encounter during their work day or even out in the community. Hoffman points out that some of the real world examples can be very personal for the students in the class.

“I’ve worked with students to pass the Canadian citizenship exam, I’ve helped students prep questions to be asking their doctors, I even sat on the phone with one student while she tried to book a medical appointment,” says Hofman. “The students will sometimes come to the class asking about something and we will spend that class going over things like brochures that can benefit their health. When they can apply what they’re learning, it sticks with them better.”

The students echo Hofman’s view about the real world application of her classes. Though most of the time the classes are full of laughter and jokes, some of the exercises can even bring on a few tears.

“We were working on an assignment where we had to use past tense,” says Cindy, a Dining Room Attendant. “So we wrote about a game we enjoyed playing in our childhood and some of us wound up crying. Sharing these personal experiences help this be more than just a class. We’re close here and it’s a lot of bonding for us.”

For the staff, having English classes offered by GEF Seniors Housing at no extra cost to them means improving their communication skills with the people they work with, the residents and tenants who live in the buildings, and to help them fully adjust to their new homes. They’re able to access something that previously was only available in formal classrooms, which many of them found intimidating.

“I’m very proud that GEF is able to give us these classes,” says Rose, a Dining Room Supervisor. “Not every company would do something like this for their staff. We don’t mind being corrected and we’re not embarrassed when we make a mistake because we’re always learning and improving. We’re very lucky that we’re being given these classes.”

Hofman reflects on many of the students who have come through her English classes and notes that so much of the success isn’t just found in the pronunciation or proper use of grammar, but comes in the new level of confidence that so many of the staff are showing.

“When they first came into the class, some were afraid their English wasn’t good enough, others were scared of failure,” says Hofman. “They do so much to teach themselves. All I’ve done is organize the space and the time and they do all of the hard work and that has helped make such a huge difference.”