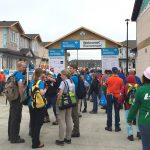 A man sits on a workbench next to a construction site. He wipes the sweat off of his brow and stares up at the beaming hot July sun. He’s been working all day and has five more days on this job site. He laughs as he takes a sip from his water bottle.

“Back in Pakistan, this heat is nothing,” he says. “It feels hot because in Edmonton, we’re at a higher elevation, so we’re closer to the sun. But Pakistan has hot, gusting winds that you never get here.”

He’s a father of three currently renting an apartment in North Edmonton. The construction site is in south east Edmonton and the bus ride takes him an hour and a half one-way. He landed in Edmonton five years ago looking for a better life for his family. He looks down into the dug up pit, with the first bit of concrete foundation of what will soon be the first home he’ll own in Edmonton.

“In Pakistan, the power goes out, the gas goes out and you can’t cook for your family,” he explains. “I’m so happy to be here in Edmonton.”

He’ll be the proud owner of one of the 58 homes being built by the Habitat for Humanity Jimmy and Rosalynn Carter Work Project, one of the largest Habitat for Humanity projects ever to be hosted in Edmonton. Members of the GEF Seniors Housing staff worked alongside the former United States President and other dignitaries such as Edmonton Mayor Don Iveson and country music stars Garth Brooks, Trisha Yearwood, and Eric Paslay.

Sheridan Kleininger, Communications Assistant with GEF Seniors Housing, has worked on volunteer build projects in the past. “I helped build a home in Ecuador,” she says. “That was an amazing experience, of course, but it’s different when you’re working on something that’s in your hometown.”

Upwards of 900 volunteers worked on the South Edmonton project near the Meadows Community Recreation Centre in the Silver Berry community. The volunteers consisted of locals from different organizations such as the Alberta Seniors Community and Housing Association (ASCHA) and the Alberta Ministry of Seniors and Housing as well as international volunteers from all over the United States who are committed to former President Carter’s mission of building affordable housing for those who need it most.

“There were times where it felt like the sun was cooking me alive and I was so out of breath I didn’t think I could keep going,” says Schieman. “But then I would look over to the homeowners, working like crazy, and I would remember that this isn’t about me. It’s about them, their families, and about how every Edmontonian deserves to have an affordable home.”

The homeowners won’t be taking possession of their new homes until July of 2019. Even with the move-in date seemingly so far away, the homeowners still see a positive in everything.

“The LRT will probably be done by the time we move in, so I won’t have to commute on bus for an hour and a half anymore,” one homeowner says with a laugh. “This will be a place I own, though. That is very important to me. I’m so grateful that all of these people are helping.”