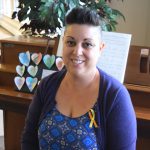 Stephanie Mahé holds six bags of yellow and orange ribbons, smiling at the hard work from the four residents at Ottewell Manor who volunteered their time and efforts for the ribbons that are a part of international World Suicide Prevention Day on September 10. The residents at Ottewell Manor are no strangers to the struggles of mental health issues and Mahé explains that the residents are able to appreciate what these ribbons means on a more personal level.

“In four days, the resident volunteers made 520 ribbons,” Mahé says. “They really love ribbon making. It’s something that not only gets them out of their rooms, it also brings them together to work on something proactive and they can share their efforts with each other.”

In 2016, Mahé, her sister-in-law Elizabeth Turnbull (Edmonton based opera singer and University of Alberta voice instructor), and a group of their friends assembled a collection of Canada-wide concerts for international World Suicide Prevention Day, calling their events Mysterious Barricades Concert Society. The concerts, which included an eclectic mix of opera singers, drummers, jazz performers, quintets, choirs,  and aboriginal performers, was livestreamed around the world. Quickly following the concert’s success came audiences and performers excited to for next year’s concert, something that the Mysterious Barricades Concert Society wasn’t sure was going to happen.

“Two and a half years ago, my brother died by suicide,” Mahé explains. “Mysterious Barricades was an event to try and help my sister-in-law [Turnbull] and me heal through music. With all the excitement around the event, we knew we had to keep it going.”

The event was named after Mahé’s brother’s favourite piece of music, “Les Barricades Mysterieuse” by François Couperin. Mahe explains that her brother was so moved by the composition that he actually built his own harpsichord a couple of years before his passing.

Last year’s concert saw 12 cities throughout Canada take part and stream free concerts as part of the awareness campaign to end the stigma around mental illness. This year’s concert will see 15 cities holding concerts, from St. John’s, Newfoundland, across to Victoria, British Columbia, with performers from notable performers such as Ontario based baritone Russell Braun and University of Victoria tenor Benjamin Butterfield. In all, the livestream will go on for 21 hours with performances starting at 2:00 a.m. Mountain Time, and all performance videos will be available on the Mysterious Barricades website for a week after World Suicide Prevention Day.

“The performers are all friends from the music community and they along with all the livestreaming technicians are volunteering their time for World Suicide Prevention Day,” says Mahé. “People kept reaching out, wanting to be a part of this event and the entire operation remains all volunteer based.”

The idea for Mahé to involve the residents at Ottewell Manor (where she works as an office supervisor) stemmed from two sources: the first being that the residents used to make ribbons for breast cancer awareness and were very disappointed when that volunteer program ended for them, and the second being the close connection between Mysterious Barricades and the mental health focus driving Ottewell Manor.

“There are people living here who were physical therapists, some have Master’s degrees,” says Mahé. “These are bright and intelligent people who have so much to give still and, just like my brother, mental illness took so much away from them.”

Mahé looks ahead to the future and sees what benefits international World Suicide Prevention Day and events like Mysterious Barricades can bring. Five years from now, she hopes to see a 24-hour staffed safe house open that can be available to people who struggle with mental illness on an emergency basis.

“A place like this will help show people struggling that they are not alone,” says Mahé. “People often spend evenings sitting in hospital hallways because they need help but hospitals are at capacity. Ottewell Manor has been lucky to have such a great relationship with Alberta Health Services, but not everyone is so lucky. By having these discussions and sharing these stories we can address mental illness more and work to end the stigma.”

This is a story that has been included on the Capital Region Interfaith Housing Initative blog, the November –  December issue of Alberta Caregiver magazine, and in the fall 2016 edition of the Community Connections newsletter.

Kim Ruzycki remembers her first visit to Ottewell Manor. She recalls touring the building, walking through the dining room and seeing all the rooms in the building that she and her neighbours would be living in. She had spent the previous year living at Rosary Hall and many of her neighbours there were also making the switch to Ottewell Manor, so she wasn’t nervous about moving. In fact, as she settled into her new home, she was surprised by what her living conditions were like.

“We can make all of our own decisions and do things for ourselves,” Ruzycki says. “But there is a strong support system here.”

Ottewell Manor was built in 1962 and was a seniors lodge for many years. In 2010, negotiations between Alberta Health Services (AHS) and the Greater Edmonton Foundation Seniors Housing (GEF Seniors Housing) began with the intention of dedicating Ottewell Manor strictly for seniors struggling with mental health conditions. In May of 2012, Ottewell Manor’s first new residents started moving in.

“None of us had any background in mental health before Ottewell Manor opened,” explains Shelley Fox, Assistant Manager with GEF Seniors Housing who spends the majority of her time overseeing the operations of Ottewell Manor. “We received some training from AHS before we opened, but we also set some clear guidelines in our agreement as to where the mental health support would be coming from.”

GEF Seniors Housing’s partnership with AHS focuses on the operations and support for its residents. Therapists, case workers, and even some homecare providers work directly with GEF Seniors Housing to ensure that everyone living in Ottewell Manor is receiving the mental health support that they need.

“AHS are the experts in mental health, we know and respect that and we wouldn’t want to try and replace that,” says Lisa Bereziuk, Manager of the larger Ottewell portfolio of buildings for GEF Seniors Housing. “What we as supportive living are doing is ensuring that the other side of that quality of life equation is being met. We’re making sure that the food we serve is of the best quality, the recreation options are things our residents are interested in, that the building is clean and well taken care of, and that the day to day of living here is the best it can possibly be.”

Like all GEF Seniors Housing supportive living sites, Ottewell Manor features a full commercial kitchen with a Red Seal chef on staff, a designated recreation coordinator setting up programs for the residents, and the freedom for the residents to choose what they want to take part in.

Both Fox and Bereziuk attribute a large part of Ottewell Manor’s success to the open communication they continue to have with their partners in AHS. With each organizations’ roles so clearly defined, there’s very rarely any disconnect between them, and that helps keep the operations in Ottewell Manor running smoothly and ensures that all the residents have a great quality of life.

“Hospital visits are considerably down for our residents, and most of the time you can’t even tell our residents are living with any sort of condition,” says Fox. “The work being done here is helping a lot with breaking the current stigma around mental health. Even within GEF Seniors Housing, new staff will be hired and not realize what Ottewell Manor does and they’ll be visibly uncomfortable about it until they actually visit Ottewell Manor and see how wrong their misconceptions were. That these are just normal people who want what anyone else would want: a good quality of life.”

What’s most important for Fox and Bereziuk every day is that the residents are happy with where they live. And they get to see their efforts help people with everything from just getting comfortable with where they’re living to helping with larger issues such as hoarding. The residents often show their appreciation for what the staff with GEF Seniors Housing does for them; some a little more vibrantly than others.

“There was one resident who became especially attached to the Ottewell portfolio’s previous manager Susan Scott and during our opening this resident actually hugged [Scott] so hard that she needed to see a chiropractor afterward,” says Bereziuk with a laugh. “But I think that resident expressed what a lot of the other residents were feeling that day and still continue to feel. And when we see our residents express that level of happiness, we know we’re doing a good job at giving them a good quality of life.”