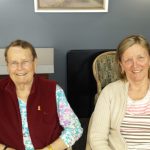 This story was originally written and published for the 2016 Sage Awards and for GEF Seniors Housing’s 2015 Annual Report.

In June 2015, the City of Edmonton decided to remove the bus stop that was located directly in front of Gateway Manor, where both Mary McVeeters and Shirley Baynes live. The City cited a lack of usage of the bus stop, claiming that fewer than one person a day used the bus from the stop, as the reason why they removed it. In a short letter given to the residents of Gateway Manor, the City explained that beginning September 6, the bus would no longer stop in front of their home. END_OF_DOCUMENT_TOKEN_TO_BE_REPLACED