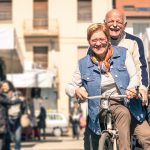 During the summer of 2016, GEF Seniors Housing tried something new to connect with more of the communities surrounding its buildings and construction sites. As GEF Seniors Housing’s Public Relations Manager Chris Schieman explains, the idea came from a bit of an unlikely source.

“When we talked about connecting with the community, what popped into my head was how I got my library card,” says Schieman. “I just finished college, I was living in my first apartment near Whyte Avenue, and I went to the Old Strathcona Farmer’s Market and met a rep working with the Edmonton Public Library. I just remember how fun it was to talk with that rep and how without a second thought I signed up for a library card.”

Schieman wanted to translate the experience he had getting his library card to talking with other people about GEF’s services in their communities. His initial intention was to see more public support for the programs and operations and he wasn’t quite sure of who his main audience would be. As the Communications team began setting up at markets in Mill Woods, at the 124 Street Grand Market, and in the Downtown City Market, he learned the audience he would be connecting with is much broader than he initially thought.

“I met with young guys who wanted to volunteer teaching yoga, people who were curious if what we had to offer would work for their parents or grandparents, I even talked with current and retired staff from GEF Seniors Housing,” Schieman recalls. “Most importantly, I talked with a lot of seniors who did not know we existed and had no idea that they qualified to live in one of our buildings.”

As spring approaches, Schieman is already looking towards the next year of markets coming up. With so many building projects seeing life all across the city, GEF’s market presence will have more to do with where future buildings are going to see life.

“Canora Gardens is opening up later this year, Sakaw Terrace broke ground, and last year we had our first community consultation with developing our Elmwood lot right behind Meadowlark Place,” Schieman says. “The markets provide a direct way to keep in touch with the communities that we’re building in. We want to hear from the communities, we want to be a good neighbour, and we’re excited about how the feedback from the markets is going to help create in these new buildings.”

All the positive connections made at last year’s farmer’s markets have spurred a lot of excitement at GEF Seniors Housing for this year’s markets. Schieman points out that the connections he and the other volunteers who worked at the markets made with the community helped make for a fun summer – even if the weather didn’t always participate.

“There were definitely some days where the weather was not agreeing with,” Schieman says with a laugh. “I remember a few days with some high winds blowing over our signs and some heavy rain totally soaking us while we tried packing up. Knowing that being out at these markets and connecting with people is helping them find friendly, affordable, and secure homes for themselves or their loved ones makes it worth toughing out any bad weather.”