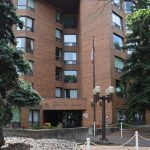 Jim Murland came back to Edmonton in 1948 after serving in the Second World War and he found his first home in the McKernan neighbourhood in the city’s south east. After he settled in his new home, one of the first jobs he had was adding stucco to the outer brick wall on Knox Metropolitan United Church in the Garneau neighbourhood. Now at 98 years of age Murland lives at Knox-Met Manor, an apartment building currently being managed by GEF Seniors Housing that was originally built in 1984 in part from help from Knox Metropolitan Church.

The church closed its doors in 2016 with plans to tear down the original building for a new condo development. For Murland, some of his memories of the church that first opened its doors in 1928 stem to one of the most distinctive design features on the building.  “I remember attending sermons at the church and always looking up at the stained glass window,” says Murland.

Knox-Met Manor was one of the recipients of a section of the stained glass window because of its close ties to the church. Of the more than 80 tenants living in Knox-Met Manor, many share Murland’s enthusiasm about receiving the window.

Joyce Dahl has been living at Knox-Met Manor since 2000 and was the building’s tenant representative to the church group. She explains that preserving the role that the church played in the development of the property and the connection between the church and the Manor is one to be celebrated. The church played a significant role not just in the history of the Garneau neighbourhood but for Edmonton as a whole.

“Even now, there’s still a lot of diversity in [Knox-Met Manor],” Miller says. “We have neighbours from Egypt, Pakistan, South Korea, Papua New Guinea, all over. I want to make sure this piece the church’s stained glass window has a place in our building to commemorate the history of Edmonton being a welcoming city.”

Gail Brown is part of a group of tenants at Knox-Met Manor who wants to see the donated piece of stained glass find a permanent place displayed in the building. Though only living in Knox-Met Manor for the past two years and having no direct connection to the church, Brown still feels a responsibility to preserve this piece of the community’s history.

“I’m in very strong support of public art that shows the history of our city,” says Brown. “The church is empty now but it helped build this place that so many people call home. We have a piece of the architecture and it’s something amazing that needs to be respected, preserved and its history maintained.”

Lorna Etwell points out that the seventh floor of Knox-Met Manor is a perfect spot to mount the stained glass. It’s a shared space where tenants go to do their laundry, read a book, hop on an exercise bike, do a puzzle, or meet in the sun room that overlooks the Garneau neighbourhood and right to the spot where the empty Knox Metropolitan United Church stands for the time being. She recalled that after some discussion it was determined that the brick wall next to the book case was the best location to proudly display the piece of community history.

“It’s an honour to have received this gift from the church,” says Etwell. “We want to do right by making sure it has a place where is can be appreciated.”