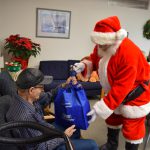 It was a very magical few days in December for hundreds of GEF Seniors Housing residents when Santa and his elves made their rounds to deliver presents as part of London Drugs’ Stocking Stuffers for Seniors 2019 Campaign.

What started out in 2015 with Operation Friendship Seniors Society and London Drugs partnering together with a goal to help 40 seniors in its first year has grown exponentially in five short years. Today, Stocking Stuffers for Seniors now helps more than 4,000 seniors in Northern Alberta and 17,000 seniors across western Canada have a brighter Christmas, and the campaign now involves all London Drugs stores. Altogether, 878 seniors in eight different GEF Seniors Housing communities received a gift this holiday season.

The approach is simple, but the impact is immeasurable. Generous strangers carefully choose a name tag from specially-marked tree displays at their London Drugs store of choice and, out of the goodness of their hearts, buy what’s written on the tag as their senior’s wish list – often adding in a few extra surprises. “I think the generosity of others in the community and the surprise of receiving a gift was really awesome,” said Montgomery Place Recreation Coordinator Christine Kemp.

On delivery day, everyone was buzzing with anticipation. “I was up early – I am so excited!” said one resident. Santa and his London Drugs elves arrived, and the faces of residents and staff lit up like Christmas trees. “It was like Christmas morning for these residents – they were glowing,” said one staff member.

It was an overwhelming sight to see the number of presents that showed up under the trees at our GEF communities. After the gifts were distributed, residents started opening their presents. As well as the chorus of oohs and ahhhs around the room, seniors said comments like “this is more than I expected”, “this is over and above anything I could have imagined”, “I got just what I wanted”, “I wish I could say thank you to all the kind people” and “I don’t usually get excited for Christmas anymore but this brought back feelings that I had as a kid.”

Some of our residents don’t have family so it was a surprise to them when they received a gift. “I wouldn’t have gotten any Christmas gifts this year, so thank you very much,” said one resident. At least one senior saved his presents to open on Christmas day, because he doesn’t have any family. These unexpected gifts, filled with love, showed the residents just how much they are cared for and each senior was grateful for what they had received.

“When you see someone’s face light up and the expression of someone who doesn’t normally get this, it’s a really special feeling and it makes my heart happy!” said another staff member.

Thank you to everyone who contributed to make this Christmas so memorable – not just for our seniors, but for all of the participating seniors who needed a little cheer this year! It will be a day they will never forget.

Around 30 years ago, Judy learned how to make dog figurines out of wool and wire hangers. She learned the craft from another woman who lived with her back when she called Strathcona Place home. Now living at Queen Alexandra Place lodge, she has become the teacher, showing the craft to her neighbour, Verna. The two ladies don’t make the dogs for just anyone, though. The pair makes the dogs for any of their neighbours who go to the hospital overnight and to the women fighting breast cancer and living at Compassion House.

“We just wanted these people to know that someone cares about them,” says Verna. “The dogs are a lot of fun to make and we get such nice letters from the people we give the dogs to. My grandchildren just love them too.”

The ladies have the craft down so tight, Verna can finish one dog every two days while the more experienced Judy can finish a dog over the course of a good hockey game. The process starts with the wire hanger bent in the shape the dog will take. Judy’s  step-son bends the hangers for the ladies and drops off groups of them whenever the ladies are running low. The wool is then tied in a pom-pom style bow and tied off to hold its shape. The bows then line the wire hanger frame and are bundled together. The dogs’ ears are tied in the same pom-pom fashion, only with looser threads to mimic the bounce of floppy ears. Beaded eyes and a nose are then hot glued on to give the dog its face, and ultimately its personality.

Before Christmas, the ladies donated 24 dogs to Compassion House. Two months later, at the beginning of March, they donated another 22. This is in addition to the dogs given to their neighbours in the lodge and to their families.

“My granddaughter is an Assistant Manager over at Julio’s Barrio and she gave a dog to one of the servers she worked with and the server loved it so much she started to cry,” says Judy. “It’s amazing how attached people get to these little dogs.”

The ladies see the attachment to the dogs in many of the people they give them to. One gentleman from the lodge was given one before he went to the hospital, where he sadly later passed away. The man was so attached to the dog that his family put it in the casket with him. This kind of emotional attachment and positive influence is far from rare for people who receive the dogs.

“We don’t think about the cost while we’re making them,” says Verna. “All we think about is what it’s going to do for people.”

Even the ladies grow attached to some of their dogs. The pair has started naming many of them before they’re given out. One with orange and blue ribbons that was given to Recreation Coordinator Pavi Lally was named Oscar, after Pavi’s favourite player on the Edmonton Oilers Oscar Klefbom. Another shaggy brown one that Judy has grown particularly attached to is named Rags.

“I almost lost Rags on the way down here,” Judy says with a laugh. “One of the ladies saw Rags while I was coming down to the dining room. I’m saving Rags for my Granddaughter. The wire frame and bead eyes aren’t the best for small children.”

The ladies have no plans on slowing down any time soon. How the gesture of making and giving one of these dogs to someone facing a hard time positively influences a person’s quality of life is very evident to Judy and Verna. Some of the future dog projects they have in mind are also a little ambitious.

“We were given this one set of wool, and it is just massive,” Judy says, holding out her arms expressing the size of the ball of wool. “We were thinking of using it to make a mom, and dad, and a whole litter of puppies. Make a little family for others to enjoy.”