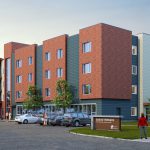 Sakaw Terrace as an idea was first conceived by Raymond Swonek when the City of Edmonton offered GEF Seniors Housing a surplus school site in the Mill Woods area. After seeing the plot of land being offered for a new affordable seniors housing development, he immediately pictured a building unlike anything GEF had ever attempted before.

“Mill Woods was really lacking affordable seniors housing,” says Swonek. “There was a huge need for lodge rooms and apartments catered to seniors with a low- to moderate-income. With there being such a huge need in this neighbourhood, I knew I had to go big – bigger than anything we had ever built before.”

Ambitions ran high for Sakaw Terrace. As the project development team began fleshing out the details that would make up this new seniors complex, Swonek started seeing something even better than he initially imagined. The designers and architects made space for 70 lodge rooms and 88 apartments, two outdoor courtyards, a communal greenhouse, a theatre room, a salon, and underground and above ground parking. Swonek explains that deciding what to include in this new building wasn’t a decision solely made by any one group.

“For any new building project, we always go out to the community and make sure they’re involved with as much of the process as they want to be,” says Swonek. “The community talked a lot about how much they like their green space, so between the courtyards and the greenhouse, we made sure to include as much green space as we possibly could.”

GEF began appearing at farmer’s markets and other community events to help keep up the momentum for Sakaw Terrace, only to be met by lines of people hoping to get on the waiting list early. With excitement running high in the Mill Woods community for Sakaw Terrace, the project team knew it needed to deliver something special and started looking to its environmental impact assessments for more inspiration.

“We decided to own more of the environmental stewardship around a project like [Sakaw Terrace],” Swonek says. “It’s important that what we build is sustainable and that we reduce our carbon footprint without compromising on our principle to provide great housing options for seniors.”

The team looked at sustainability in two ways, with the first being environmental. Sakaw Terrace was built with a combined heat and power unity (CHP), which better uses natural gas utilities by using the power and hear generated more efficiently. Estimates show that the CHP will reduce carbon gas emissions by 530 tons a year.

The other side of Sakaw Terrace’s sustainability is the financial side, which is helped by the CHP offering a savings of around $80,000 that GEF can reallocate to operations and services for seniors. But Swonek explains that they wanted to take financial sustainability a step further with a housing model he typically only sees in Europe.

“Sakaw Terrace is the first building in Alberta to offer a mixed-income model for housing in Western Canada,” Swonek says. “Thirty per cent of the suites in Sakaw Terrace are going to be offered to any senior, regardless of income, at a market value. We can then use the profits from the market value suites to keep funding the operations at Sakaw Terrace, making it a completely self-sustaining building.”

Though the financial side of sustainability is appealing to GEF Seniors Housing (especially being a not-for-profit), Swonek’s more proud of the communal aspects of these innovations.

“What our efforts amount to is making Sakaw Terrace more accessible to the 20,000 seniors currently living in the Mill Woods area,” Swonek says. “As people age, they want to stay in their communities. They want to be close to their families, friends, and the services they’re comfortable with. At the end of the day, the people have to come first. This is going to be someone’s home, and that needs to stay front of mind before anything else.”

During the summer of 2016, GEF Seniors Housing tried something new to connect with more of the communities surrounding its buildings and construction sites. As GEF Seniors Housing’s Public Relations Manager Chris Schieman explains, the idea came from a bit of an unlikely source.

“When we talked about connecting with the community, what popped into my head was how I got my library card,” says Schieman. “I just finished college, I was living in my first apartment near Whyte Avenue, and I went to the Old Strathcona Farmer’s Market and met a rep working with the Edmonton Public Library. I just remember how fun it was to talk with that rep and how without a second thought I signed up for a library card.”

Schieman wanted to translate the experience he had getting his library card to talking with other people about GEF’s services in their communities. His initial intention was to see more public support for the programs and operations and he wasn’t quite sure of who his main audience would be. As the Communications team began setting up at markets in Mill Woods, at the 124 Street Grand Market, and in the Downtown City Market, he learned the audience he would be connecting with is much broader than he initially thought.

“I met with young guys who wanted to volunteer teaching yoga, people who were curious if what we had to offer would work for their parents or grandparents, I even talked with current and retired staff from GEF Seniors Housing,” Schieman recalls. “Most importantly, I talked with a lot of seniors who did not know we existed and had no idea that they qualified to live in one of our buildings.”

As spring approaches, Schieman is already looking towards the next year of markets coming up. With so many building projects seeing life all across the city, GEF’s market presence will have more to do with where future buildings are going to see life.

“Canora Gardens is opening up later this year, Sakaw Terrace broke ground, and last year we had our first community consultation with developing our Elmwood lot right behind Meadowlark Place,” Schieman says. “The markets provide a direct way to keep in touch with the communities that we’re building in. We want to hear from the communities, we want to be a good neighbour, and we’re excited about how the feedback from the markets is going to help create in these new buildings.”

All the positive connections made at last year’s farmer’s markets have spurred a lot of excitement at GEF Seniors Housing for this year’s markets. Schieman points out that the connections he and the other volunteers who worked at the markets made with the community helped make for a fun summer – even if the weather didn’t always participate.

“There were definitely some days where the weather was not agreeing with,” Schieman says with a laugh. “I remember a few days with some high winds blowing over our signs and some heavy rain totally soaking us while we tried packing up. Knowing that being out at these markets and connecting with people is helping them find friendly, affordable, and secure homes for themselves or their loved ones makes it worth toughing out any bad weather.”